March 1991; after the war was over in Kuwait, the Iraqi army was defeated, and the US did not want Saddam to stay in power anymore. This time, they wanted the Iraqi people to rise up against him. The former president Bush stated: “There is another way for the bloodshed to stop, and that is for the Iraqi military and the Iraqi people to take matters into their own hands. They need to force Saddam Hussein, the dictator, to step aside and re-join the family of peace-loving nations”. The old regime was tyrannical, with the country serving as its prison. The Kurds and the Shia Muslims were targeted for their ethnicity and religious beliefs. The Iraqi people believed that the US, or at least, its neighboring countries would have their backs. In March 1991, both the Kurds from the North and Shia from the south rose up against the Ba’ath regime.

Neither the US, other Western countries or even the neighboring countries intervened.  They did not think that a powerful dictator who had been at war with Iran for eight long years and who had invaded Kuwait, would be able to resist the will of its own people. What followed was a desperate attempt by the Peshmerga in the North and the rebel forces in the South to grab a hold of some of its key cities. The regime responded to the uprising with brutal force and regained control within a mere few days. During these few days, the cities’ landscapes were marked by a barrage of indiscriminate artillery attacks, helicopter gunship strikes and ravaging tanks through the streets. The Kurds in the North flew and dispersed to the mountains, several refugee camps along the Turkish border and Iran. In the South, the civil defense sirens were hit, to subsequently massacre the people sheltering. The cities of Najaf and Karbala were devastated along with thousands of casualties and more than a million people were displaced. Words cannot describe the extent of human suffering.

In a way, I’m happy my family didn’t flee, because we survived, and I can share my story with you. I can’t recall exactly what year it was -probably around ’91-, or what was happening, because we were spending most of the time in my grandmother’s underground shelter. This is the house where I grew up as a kid, and where I recall most of my memories of the war from. I remember the helicopters flying by with the rattling, firing indiscriminately into my hometown. We weren’t allowed to leave the basement, rightfully so. The world was painted with black smoke and its petroleum scent, whilst the shelter had safe aroma’s of all the foods that were stored there. The two small windows -or rather ducts-, provided for some daylight and limited fresh air. The bitter cold was slightly soothed by the old furniture and the mattresses that were laid our for six kids, my parents, grandmother and my two aunts. A month later the situation calmed down, electricity came back on and I could enjoy a good dose of Tom and Jerry, my favorite cartoon.

I was fascinated by the trickeries they pulled with banana peels, waiting for one another to trip up. I always wondered how banana’s would taste like. Iraq didn’t grow any bananas at the time and was furthermore suffering heavy sanctions imposed by the west, making it near impossible to buy them. If you did manage to do so, you would pay a hefty price. I talked to my aunt about this, before writing this. She felt reluctant to talk about it, as she clearly was embarrassed. She recalled an occasion where she, her sister and my sister were going to visit one of her friends. Along our way, I noticed banana’s hanging outside one of the shops and I asked her if she could get me one. I told her I had seen them on TV and was curious to find out how they tasted like. She claimed that one kilogram costed 30 Dinars back in the 90’s and we could only afford 1 for Dinars, since this is what her salary allowed.

The only condition was that I’d share it with my sister, so each had a half. Turned out it was even smaller than a half since she took a bite off each of the halves. Who can blame her? The banana was so good that I can still taste it. We made sure absolutely nothing went to waste, Including the inner layer of the peel, which no one eats. Not me though, I still eat them, whether its bitter or not.

It is only since 2007, when Kurdistan was flooded with newfound wealth,  that I remember us having bananas in our fruit bowl, every day. Still, it didn’t taste the same as it tasted for the first time.

You might recall a short video I posted earlier, where I explain why the color yellow is so dear to my heart. It reminds me of that first bite. It reminds me of holding my aunt’s hands and strolling through the streets.

Fashion is as tangible and real as it is an emotional roller coaster for me, that’s why I’m so intoxicated by it. Sometimes my mind wonders off into thinking what it would be like if I hadn’t been born in a war zone. Would I ever get to appreciate food, family, happiness and least but not least -fashion-, the same way as I do now? Perhaps, but I would definitely be less obsessed with yellow and.. You know… Bananas.

I will see you very soon in the next post, and I hope your mind didn’t go elsewhere each time you read banana. 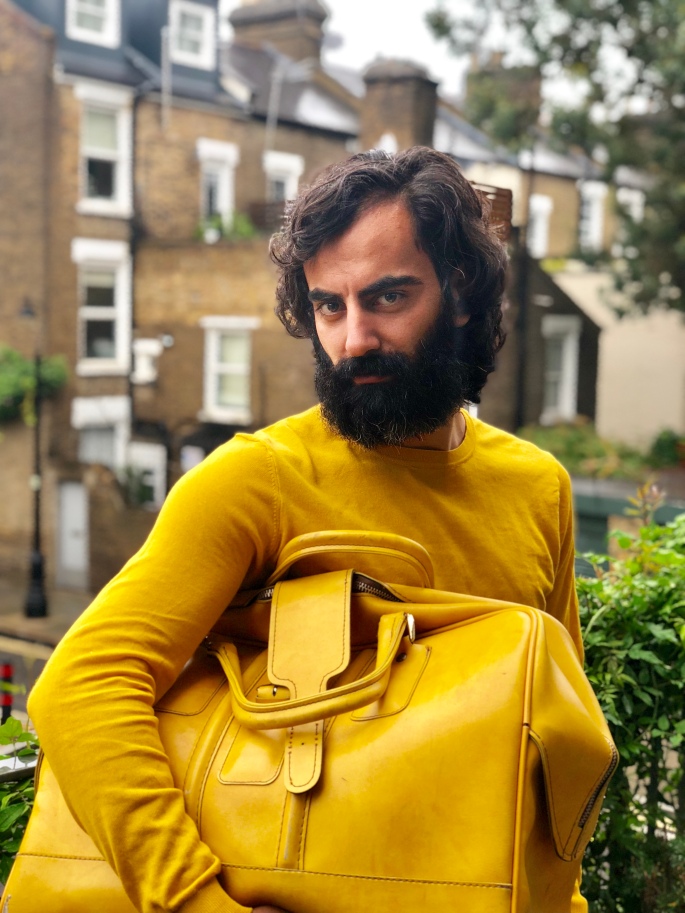 View all posts by War & Fashion

One thought on “Bananas”

We live in an era of conflict and war. This blog will take you through Ali’s experiences of life in a conflict zone and his passion for fashion. Before you start, take a deep breath and imagine yourself with Ali, as you follow him around his land while he tells his story.